Premier of a documentary film “Kechigan” 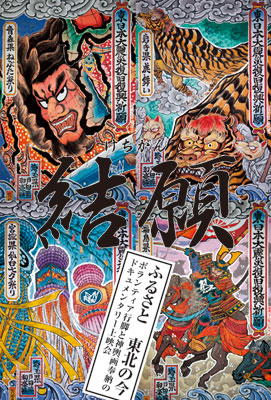 “Kechigan” what’s now in Tohoku, our home land.
A documentary of the road trip for Tohoku volunteer and dedication of a painting for local festival.

HorienⅠ is dedicating a tattoo motif painting for Mandou Mikoshi, Toda city in Saitama every year.
The chief of Toda-mutsu, Mr.Enomoto said “Let’s paint a picture of Tohoku’s local festival!”
I was moved by the idea and start working on it right after I heard this.

The painting was designed following these festivals in Tohoku area, Nebuta festival in Aomori, Toramai in Iwate, Tanabata festival in Miyagi and Souma Umaoi festival from Fukushima.
They put these paintings on portable shrine and people carried it around the town for praying for the recovery from the Tohoku great earthquake.
HorirenⅠ thought she wants to dedicate these pictures to the local shrines and temples in Tohoku by herself.

It is the great film footage of her road trip, shoot by herself, to show Tohoku‘s Today.

On that day you can see the messanger from above coming down all the way from Iwate, it takes over 20 hours for round trip!!
Please spread this Hakozaki-Toramai!
I believe the sound of clapping hands will save the town.
｜虎舞いの画像を検索してみる｜
Rise from the mud! Hakozaki-Toramai!
There is a town Hakozaki shore line of Iwate.
And there is this sacred dance called “Toramai”.
There is a man who made this Toramai by his own.
“I’m gonna change this boring town!”
He screamed when he was 24 years old, and he made it. Now he is 65 years old. He changed this town with the sacred dance.
This dance is about to spread into the world,
However, here comes the cruelty of this world.
Tsunami, the black blade washed away every proud they had, their houses, jobs, family and the festival.
Now they are living under the temporally dwellings.
Mr. Arayais the Oyabun(a chief) of Toramai.
He was in the deepest grief of this tragedy and he said “It’s like living hell here.”
I couldn’t stop myself and yelled to him,
“Please show this Toramai in Tokyo!”
Mr. Araya dropped his head down and said,
“What..? We have nothing. We lost a lot of things, not only people, but we lost the costumes and drums, and everything.. I have to go into the mouning for next one year.”
Since 90% of his lofe was dedicated to Toramai, his feelings of loss is great, I know.
But, it’s not for him! If you are tiger you have to roar!
I proposed him so many times, but every time I asked, he turned down.
They need 30 people at least to do Toramai, but it’s Tsunami took away those people, no equipment.
It takes more than 10 hours by bus to come to Tokyo.
People finally start to go fishing and busy, so on and on.
And finally, I got a phone call! They are coming!
They dig up the costumes and equipment from mud and remake the Mask and washing those costumes under freezing sky. They are coming to Tokyo!!
If the stain of mud is still there, the skin of the drum is loose, not enough people, I still admire them. I think they are really cool!
But they got a life to live so it’s going to be one day trip..What??
The come all the way to Tokyo for only a few minutes?
I couldn’t stop crying.
It is the resurrection of Hakozaki-Toramai of Iwate in Tokyo.
Let’s cerebrate it together!!
I know if we cerebrate and witness the sacred dance of the messenger from the above and those Samurais of Hakozaki in Tokyo, There will be a great Toramai festival next year.
Once Mr. Araya’s sprit got lit, he will make it better!
It’s still not perfect, but it will summon the real dragon next year in Hakozaki.
Please come and check this out!
I believe the sound of clapping hands will save the town.